I know the title suggests that this is a race report, and I swear I ultimately get there, but I feel it necessary to step back a bit to analyze how my life spiraled into this all-consuming way of living. When I eventually started running ultramarathon distances at the age of 36 in the crazy year that was 2020, people began to inquire as to “why do you run that far? I don’t even like driving that far.”

These hilarious and bold inquiries led me to start questioning: why do I want to run that far, and how did I get to this point where running for hours on end brings me so much needed joy and mental clarity?

As far back as I can recall, likely originating when I was a 7-year-old, knobby-kneed, bumbling ball of kinetic energy, I’ve always been a runner. I never questioned why I felt compelled to run as a child; I just strapped on my hand-me-down sneakers and ran. It likely had something to do with me attempting to recreate the adolescent dreams I consistently had of flying. Or perhaps it was the undiagnosed ADHD symptoms manifesting itself through my feet (a diagnosis I’d eventually receive in my early thirties). Or maybe it was an outlet for my angst after being abandoned, along with my younger brother and sister, by my drug-addicted teen mother and imprisoned father, causing us to grow up as one of many foster children in a chaotic, unstable, and abusive home environment. Maybe it is in my DNA and I was just born to run. 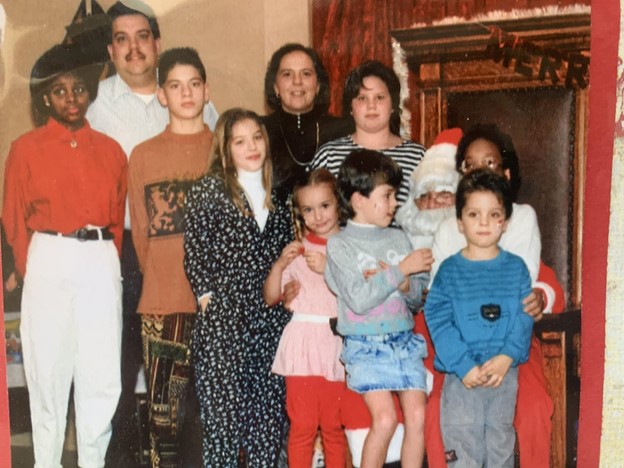 There are many reasons and no reasons at all for why I started running, but the reasons I kept running were highly influenced by a number of compounding factors and influences in my life. I kept running when the responsibilities of caring for an energetic pit bull that my family adopted fell on my shoulders. I kept running as I wandered aimlessly with my dog in the small southeastern Massachusetts town I grew up in. I kept running in high school after being recruited by the cross-country coach during gym class, who brought us running through beautiful forested trails that surrounded the school (where I discovered my love of nature and trees). I kept running after struggling as a lost and completely independent 17-year-old UMass undergraduate student, the furthest state school from my hometown that accepted the scholarship I received. I kept running throughout the strenuous years I endured cooking in sweaty, fast-paced, testosterone-laden kitchens throughout western Massachusetts.

As I grew older and finally addressed the repercussions of my youth, running eventually replaced the hole in me that the missing chaos in my life had created. Up until April 2020, and before I met my running partner and the inspiration for running ultramarathons, Rufus, the furthest I had ever run was 15 miles. I had very few aspirations for running ultra distances and didn’t really even know that they existed… that is, until Covid-19 changed our way of living.

After having to teach from home for months on end, being quarantined to home, with little connection to the outside world that many of us took for granted, and losing both my dad and grandmother to the virus, I needed an outlet. And I discovered this amazing, unforgiving, daunting, and beautiful sport we call ultramarathons. 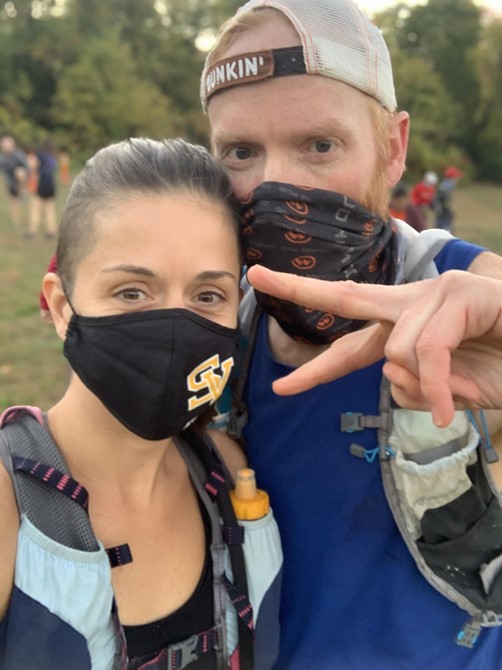 I’m sitting in the warm car with Rufus, my running partner and favorite person, willing myself to enter the dark, cold morning in running gear not quite fit for the current temps (comforted by knowing that I’ll be glad I’m just in shorts once I’m actually running). I’m gabbing Rufus’s ears off, convinced that I’m annoying him but not able to stop myself because I’m nervous, anxious, and full of self-doubt. I know once I exit the car there’s no turning back, no convincing myself that I don’t have to do this to myself. Luckily, I got out of the car.

I’m simultaneously in a state of shock and full of nervous energy while waiting for the race to start. Numbly going over every little detail that could affect my performance- should I take off my gloves and long-sleeve shirt now even though it’s cold but won’t be later? Do I really have to empty my bladder again or is my mind playing tricks on me? Do I have to wear my mask the entire time or how do I get it back on my face without wasting too much energy? How am I going to stay 6 feet away from people on a single-track course with hundreds of other athletes? Did I make the right decision about running in my favorite Altra trail sneakers instead of the road sneakers I bought specifically for this race one month ago? Do I have enough fuel so I can avoid stopping at the aid stations? Can I actually run 50 miles, as I’ve never done this before, or an actual marathon (this is why I was placed in Wave 3 initially, but was able to sneak into Wave 2 so I could run with my partner)? Doesn’t matter now, because wave 2’s race has officially started and I’m running before I even realize it or can second guess everything.

As I hit the first few 2.5 (uphill) road miles, I remind myself to not let the built-up adrenaline and nervous excitement cause me to start out too fast, as I recall that the Appalachian Trail is coming up- all 13 miles of that rugged, unforgiving terrain. In my mind, and according to every race report I encountered and the advice I received from past runners about this race, the AT portion was going to be the most arduous and physically demanding aspect of the race. Even though I primarily run in the technical, ankle-breaking, and heart-wrenching mountainous terrain that is western Massachusetts and other parts of New England, I worry that I’m ill-prepared for what’s coming. This is partially due to the slippery leaf-covered trails I have been gingerly running on for the past few months (I couldn’t bomb downhills as I normally would have because it’s difficult to distinguish what’s a safe landing zone and what’s a leaf-hidden rock or tree root), and mostly because I’m running against Nike-sponsored runners in one of the oldest and well-known ultra races in the eastern United States. In the weeks prior to the race, I had grand aspirations of placing as a top female, but as race day approached and I learned more about the race, and who the race attracts, my delusions of being an elite ultrarunner with a chance to win slowly deflated. However, as soon as I hit the AT section of the race, all nagging thoughts and doubts disappeared as my inner trail animal took over; this is my natural habitat, my home. As I bounded up and down the singletrack trails, mostly clear of the beautifully macabre reminders that the cold kiss of winter was upon us, my focus was undeterred, footing rhythmic, and my inner child was ecstatic — I can fly! Not only did I survive the AT portion of the race, but I also broke out of it well under the goal time I set for myself, all with a smile pasted on my face that would last until I crossed the finish line many hours later.

The next section was 26.3 miles of the mostly flat and gorgeous towpath that parallels the Potomac River. Other than making sure that I was consistently putting nourishment and liquid into my body, and resupplying at the plentiful and well-managed aid stations that I mentally checked off in my mind, mile after mile passed without much thought or worry, my anxiety seemingly disappearing and my mind clear. As I coasted along at a consistent pace, making friendly conversation with the few runners that I kept pace with/continued to pass/be passed by, I was vaguely aware that I was slowly ticking off the runners from Wave 1, inching my way up to podium placement.

It was around mile 40, the furthest distance I had ever run up until that point, that my body began to show the consequences of precariously bombing up and down the AT trail; my quads were ripped up, calves barking, and hips, ankles, and knees throbbing and rebelling from the flat, fast course my body is unaccustomed to running. My focus and trepidations had solely rested on getting through the AT section in one piece, and unbeknownst to me, the worst was now upon me: eight miles of grueling, rolling pavement. I came out onto the road determined to keep to the pace I had been comfortably sustaining, but as I crested to what I thought was the end of the first hill at the start of the road section, I quickly discovered that it was going to be the most painful, mind-gobbling, and monotonous experience of the race. As my feet screamed in agony, I mentally beat myself up for not bringing my road sneakers to change into, stopped myself from kicking my trail sneakers off to continue barefoot, and somehow willed myself not to quit. It’s difficult to comprehensively describe how we as humans can endure such mental and physical anguish and why we push ourselves beyond the limits of our capabilities, but in my head, I had no choice other than to “eat the pain” (as Rufus likes to point out about me) and continue the last few laborious miles. 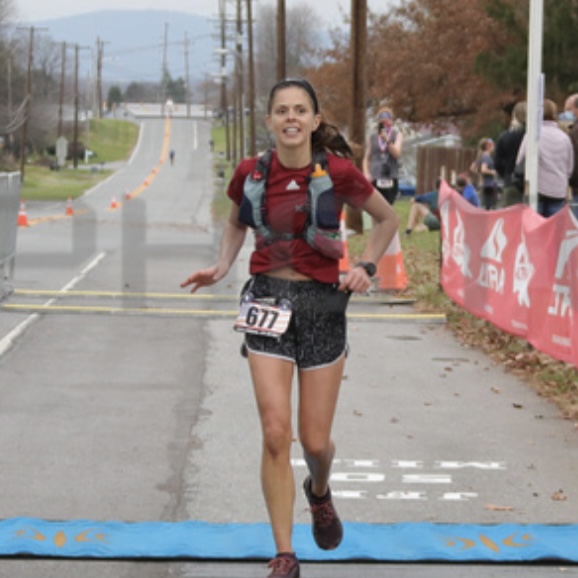 Finally, the finish line was in sight, and my spirits seemingly recovered as I heard the announcer excitedly exclaim that “another female runner has cracked the top one hundred.” 50 miles later, I crossed the finish line at 8:04:28 (9th female, 62nd out of 700 overall), still smiling, but with tears of exuberance, euphoria, and relief streaming down my face. Those tears helped me to realize the many reasons as to why I run — it’s an opportunity to focus on just one goal and to forget about life’s responsibilities, disappointments, failures, mental health issues, etc. Running has been the only constant in my life, and it has led me to become a better version of myself; I’m eternally grateful for the grit, resiliency, and determination it has provided me as tools for continuing on when life seems bleak. I still struggle daily with my profusion of human faults, and running is one of the few things in my life that allows me to flirt with inner peace and calm, mental clarity, and a sense of knowing myself and finally feeling like I belong.

Brenda is a SMAC member from Williamsburg. (e-mail)

Originally published as an article in the January/February 2021 issue of The Sugarloaf Sun.