What a season. This year I was going to set a goal and carve out the time for training to really see what I was capable of. When the pandemic came, I found myself working at home, and decided to use the time saved from my commute to increase my running volume. I did, starting a pattern of running 50 miles per week for three weeks, then scaling back to a recovery week of 30 miles or so. It was hard, but my fitness was definitely improving.

Sometimes during that third week of 50 miles I really wondered why I was doing it. Then after the recovery week I was ready to go again. I had started adding in intervals and bounding hill repeats. Despite some small setbacks, things were going well. I was able to run faster while staying in the aerobic zone and the hill repeats were increasing my muscular endurance noticeably.

And then things started to fall apart.

My goal race, the New England Green River Marathon in late August, was cancelled. Cancelled by me, in fact. Along with my wife Laure, we are the race directors. No problem, though: we had our back-up marathon, Mount Desert Island in Maine in October. And then, you guessed it: that was cancelled as well.

At about that time we bought a beautiful little house on a hillside in Leyden. A lovely old house with beautiful views of our little valley, but in need of care. The previous owners had neglected it, and at 170 years old, neglect isn’t good. We’ve been working away on it and are enjoying the slow transformation of the house. It’s time consuming, however. Then I started returning to work three days a week, so my commute was back (in reduced form). My running schedule fell by the wayside. I didn’t stop running, but the volume fell dramatically. Perhaps worst of all, the pattern was broken and the wind was out of my sails.

It’s important to stop and put this in perspective. These are the problems of a very fortunate person. My “problems” include a rewarding job that I love (most of the time!), a beautiful house that we can see blossoming as we work on it, and a beautiful place to live and run. And somehow the universe has aligned so that I will spend my time on earth with the best person I have ever known: my wife, Laure. The problem, if there is one, is how to balance all these gifts. 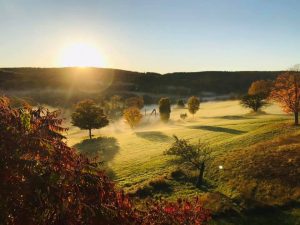 Now that the new patterns of work and home life are taking a more solid form, I’m increasing my running volume again. I’ve been pleased to see that I haven’t lost much base aerobic fitness. Those long months weren’t wasted. I have a little catch-up to do as far as endurance and strength, but that’s OK. As runners we know what it’s like to have to catch up sometimes. What’s a little harder for me is the goal aspect. What do I want to achieve? Do I want to train for a marathon that might not happen? When will any race happen again? Fortunately, Laure is also an experienced and accomplished runner, and my coach; did I say I was lucky?

After some reflection and running some ideas past Laure, I’ve come upon two seemingly divergent goals: My “fun” goal is to work my way up to a 50K trail race. I don’t necessarily need to do it super-fast, but I want to do it well. I love running trails and came to really enjoy long trail runs during my 50-mile weeks. I know – 50K isn’t much for many of you, but it seems like a good goal for me. My more serious goal is a PR half marathon. I love 10Ks and half marathons. There aren’t a lot of 10K races around but there seem to be a fair number of half marathons. I’m a little off my marathon goal because each race is so high stakes and takes so much time to prepare for. I guess I don’t want to get burned again. If a half marathon is canceled, or if I have a bad day, the recovery time isn’t that long, and getting back up to optimal condition isn’t that big a leap. My half marathon PR is six years old now, which makes it a good, fairly challenging goal.

So, things change, we switch gears, but we keep running!

Tom is a SMAC Board member from Leyden, and a previous club president.