It’s a topic we all will grapple with, wrestle, ponder, ignore, deny, dismiss, and eventually accept. Lately, I run more local races. Two decades ago, waking at 4 a.m. to drive a full three hours to race up Vermont’s Mt. Ascutney or to New Hampshire to run through Pisgah State Forest, or even to a small-town 5K didn’t faze me. Things have changed. The transition sneaks up on you, and then insists on acknowledgement by banging on your door, sounding the vuvuzela, or clanging the cowbell. The package has arrived: age, with a free enclosed gift of unpredictability.

When someone suggests a trail run or race, I pause, then share somewhat hesitantly that I have but one sighted eye for which I am grateful; vision in the other was lost to glaucoma. I’m circumspect, having been diagnosed over 35 years ago. I have to be. Trail running at the local game refuge was my daily routine, but then I started tripping. I stopped, then tried again two years ago. The run became a walk, a long walk, pleasant but not planned. Uneven terrain in dappled light makes for a treacherous excursion. I mention it because it’s not an excuse. I’ve adapted. The runner Marla Runyan continues to excel in the Paralympics. She is also the first legally blind athlete to compete in the 2000 Sydney “able bodied” Olympics. There are others with far less sight than I have, tackling far more fraught events like Boston. Could I run tethered to a guide? To be determined.

As time unwound, my condition progressed. I submitted to laser treatments and a variety of eye drops, some of which caused my heart rate to dawdle to a “dead slow” or make my hands numb. Two years ago, when I again refused a surgery to create a permanently open wound to relieve pressure that would not have aided my sight, the vision trickled into oblivion. My left shin became accustomed to bruises. I’d trip on a curb that I forgot was there because now I have to be alert that it even exists. Expending energy on seeing seemed wasteful until it became a necessary means to an end. It was a learning curve. After a fall, my injured knee curses my clumsiness because I’d feel stupid if my brain cursed it instead.

I get anxious at the start of a race when surrounded by a dense, large pack in motion. The narrow roads of the Cherry Blossom Ten-Miler caused bottlenecks. I frequently turned to my blind side then with head down, scanned for potholes amongst so many feet. I could not look up for long. I also had to remember that I was racing. My hearing grew more acute: sneakers slapping the pavement, voices ebbing and flowing, the rhythms of breathing, the muted crowd noises. A racer’s elbow jabbed hard into my chest. I apologized. He apologized. For the first seven miles I focused on staying steady. It’s about proprioception as I fumble through space. Situations crop up as we age, like a heart condition or arthritis. Calling them limitations is step one. Step twelve is making it work. You strain a neck muscle washing your hair. You break a tibia stepping from asphalt to grass, like Bill Rodgers. You walk into — rather than through — a glass door. I run road races. It’s what I can do. 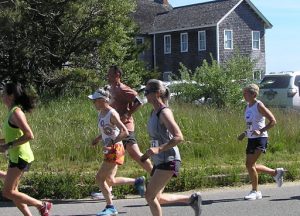 Jeannie (white visor) runs just ahead of Janet Kelly (short blond hair) at the start of the Ocean to Bay 5-Miler in Truro, MA.

Mark Jenkins, a writer and mountain climber, gathers wisdom as the minutes transmute into days and years. “No, I’m starting to stumble from fatigue.” ‘Beat,’ I mumble. My age is showing, despite all my efforts to deny it,” wrote Jenkins in the article “Daddy has to go” in Outside magazine.

Jenkins assaults peaks, charting new routes, in an apparent need to be the first or the fastest or some other superlative. This drive is common among career athletes because the lifestyle requires discipline and the effort can hurt. Yet, the transition from Wonder Woman or Superman or whoever your superhero to mere mortal is unnoticeable at first until your flying ability becomes compromised because the wings that give you flight ache in the morning.

“… J.J. takes weight from my pack. It’s what I did for my mountaineering partners when I was his age, when I was strong and invincible. Even in a fugue of exhaustion and hypoxia, I’m still capable of realizing that I’ve crossed into unfamiliar territory.” The aging athlete relents, allowing themselves to let go, and then gives this new inchoate concept permission to take shape. 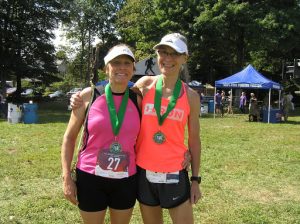 Aging through a running career is the premise of Jonathan Beverly’s 2017 book Run Strong, Stay Hungry. A former editor of the defunct Running Times magazine, as well as a runner, coach, and writer, Beverly shares personal histories and strategies of longtime runners. His interview with Joan Samuelson (a year younger than me) revealed she trains by instinct, and mostly alone. If one day she feels like tackling a 20-miler, off she goes. She is a role model because she still competes, unashamed of slower times (not by much) because, really, finish times are numbers. Reading the body’s signals as we age is a skill worth learning.

Twenty years ago, I refused to believe Dr. Tim Noakes when he wrote about studies in Lore of Running that explained why we slow down with age. Recent research suggests that the decline is most dramatic after age seventy in fit individuals but has already begun decades earlier. During my forties, my legs and heart felt strong. I was also 15 pounds heavier. Goodbye to muscle mass. Though my finish times creep up with each year, the effort still feels hard.

Janet Kelly and I have competed in many of the same races over the years. Post-race at the Ocean to Bay 5-Miler in Truro, MA, I learned she merrily skips into the seventy plus stratosphere. She asked my age and smiled, saying that next year, she wouldn’t have to deal with me in the age group, noticing that as older women, we were few in number. By running a marathon every five years, she capitalizes by not stressing her body while increasing her chances of placement. She, too, trains mostly alone.

After running the Food Truck 10K in Warren, RI, we ventured to the Cape and went to our favorite ice cream shop, owned by two runners. “How goes your running?” I asked after ordering a grape-nut sundae with rainbow sprinkles; grape nuts, healthy, right? The owner looked sad having torn his Achilles tendon nine months ago and then being told by the doctors that he was “too old” for repair at age 76. I heard the same after having torn my hamstrings in my fifties. That’s when you start doing other activities: cycling, swimming, tai chi. Easier said than done, but necessary for your sanity.

This year a female running friend turned seventy. Her statement piece of racing gear is a strand of “pearls.” We talk about how we, as senior women runners, seem to be a rare species at regional races and how we still love the sweaty effort of competition. If you are self-critical, you’ll feel annoyed that goals seem less lofty with each passing year. I’m not out to impress anyone. Satisfaction is more personal these days, whether it’s trying to break 48:00 in a 10K, running a race in each New England state, or striving for the USATF Pheidippides award.

Age. To an athlete it’s a physiological inconvenience and eventually a fact. Fertile, fallow, time, tide, May, September. It’s also a gift of resilience as a chance to apply the wisdom you are accruing, but only if you accept it. As my own gray-haired superhero, I don’t fear the reaper. Let me show you my age. More cowbell please. 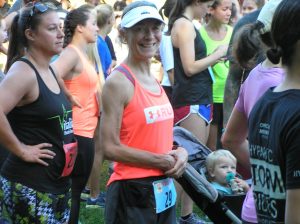 Jeannie is a longtime SMAC member from Granby, CT.