This map shows towns the 2018 SMAC members live in. It is limited to just western MA, though there are also several members from other states and countries who are not shown here. Towns that have more members are depicted in darker shades of red; towns with fewer members are lighter. 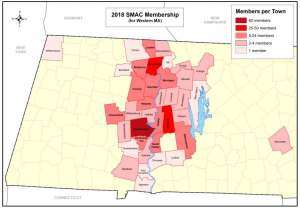 Overall the map looks fairly similar to 2017, with a few notable differences. There appears to have been a very slight northward shift, with fewer members in the Springfield area and more in the north Quabbin / Greenfield region. Also, a few towns on the periphery of the primary region winked out, while we gained members in a few others. Some of the losses are probably just due to people forgetting to renew (remember to renew!) or remembering to renew too late in the annual cycle to have made it onto the map, and we shouldn’t read too much into changes between any two given years. That said, I can’t help but find it fascinating to ponder possible trends and/or geographic shifts as I compare maps from multiple years (I was a Geography major…).

As we look ahead to 2019 and beyond, I think it could be instructive for us to consider where we might focus outreach efforts, should we decide to try to grow the club further or gain new members to replace ones who have left. We’re not alone in western MA. We’ve got a lot of really excellent friends in neighboring clubs, and many of us have membership in multiple organizations/teams. I think this can be quite healthy, as each group has a slightly different focus, purpose, and/or geographic locus. For my part, I’m going to try to recruit a few new SMAC members in the coming year, and I hope you do too!

-Ben (editor of The Sugarloaf Sun)